Covid-19: How Modi government is running the country from home

New Delhi, April 7 (IANS) The government has been advocating strict social distancing norms and work for home, for a month now in wake of the coronavirus outbreak. As of Tuesday, India has surpassed 4,400 coronavirus cases with 114 deaths at least. While 133 crore Indians remain locked down inside and most of the urban workforce working from home, how is the government of India and its top ministers running the show from their home, themselves?

Number two in the government and considered the most trusted person of the Prime Minister in the Union Cabinet, Shah”s core team has been significantly slashed. In normal time, he has a core team of around 40-42 officers working for him at the North Block. But now, he has limited his visits to the ministry and retained less than one fourth of his workforce. 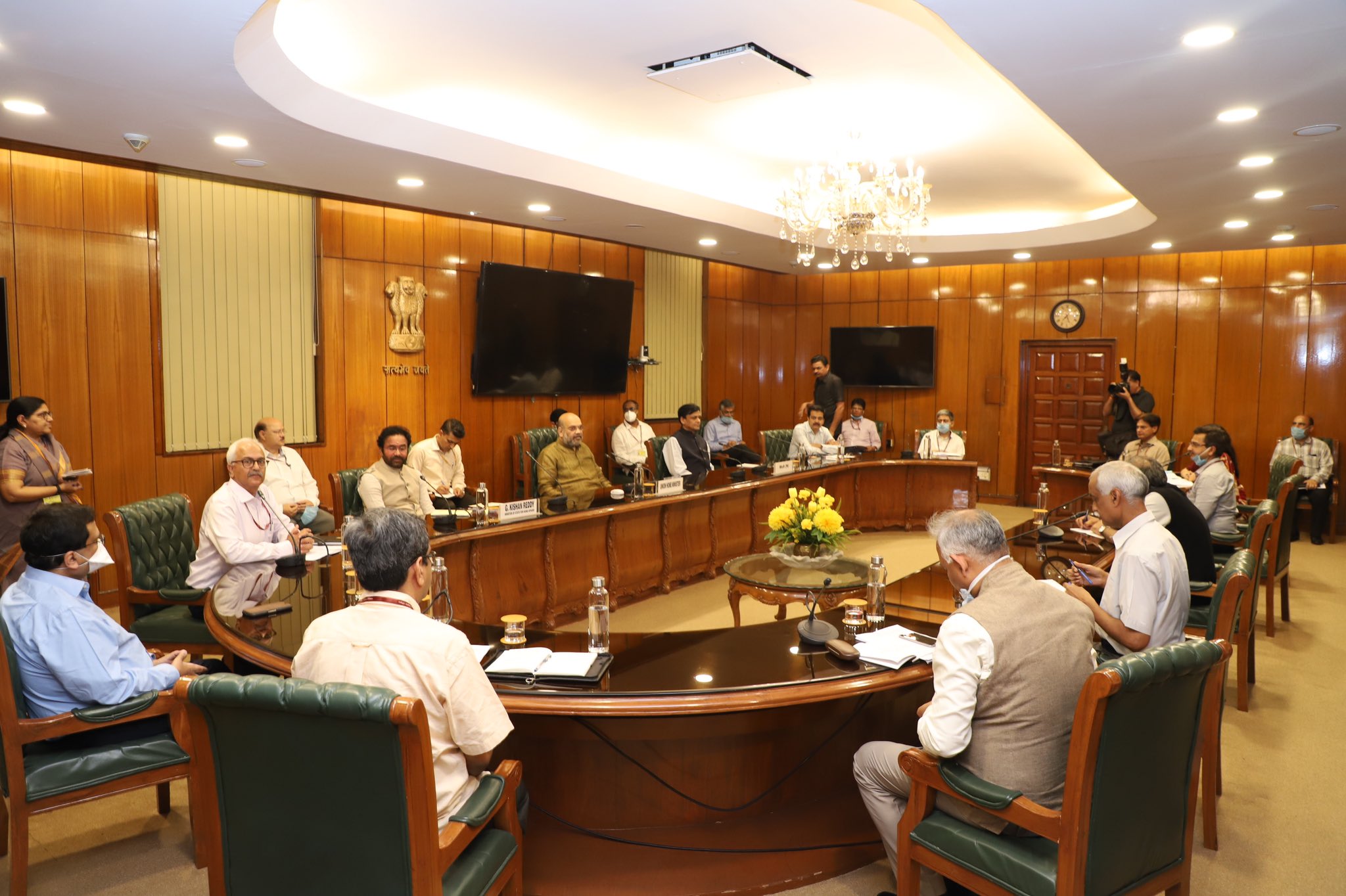 Since the lockdown, his Krishna Menon Marg residence which previously was late Prime Minister Atal Bihari Vajpayee”s house has been turned into a temporary office. All real time updates from concerned departments are sent to this office.

Shah has visited the Home Ministry four to five times since the nationwide shutdown was imposed. Whenever he visits North Block, he ensures only the bare minimum staff, whose presence is absolutely unavoidable, is present, say sources.

Cabinet Secretary Rajiv Gauba and Home Secretary Ajay Bhalla brief Shah on a regular basis about the steps being needed to adopt to contain the spread of Covid-19. Most of Shah”s coordination happens through phone, while at home, say sources.

Rajnath Singh, who has been chairing the GoM on Covid-19, has been one of the sincerest followers of work from home. One of his aides says: “He can go to South Block. But that will mean coming in contact with at least a dozen people everyday, at the bare minimum. When you have the technology available to avoid that, why not use it?”

He is known to be a wide user of Zoom video. However all government interactions take place through secured video transmission lines. On a heavy work day, le holds nine to ten video conferences a day, while on a lean day that can be one. For instance, there hasn”t been any such interaction at all this Sunday.

READ ALSO:  History maker Sindhu dominates Worlds like no other

Even while meeting his ministerial colleagues like when he had to chair the GoM on Tuesday, he instructed his staff to use a bigger room so that each chair can be placed a safe distance of one metre.

Javadekar has been one of the busiest ministers ever since the shutdown was enforced, having to take decisions of three key ministries that come under his purview -Information & Broadcasting; Environment, Forest &amp; Climate Change; &amp; Heavy Industries & Public Enterprises.

He is also tasked to brief the media on cabinet decisions like the one that suspended MPLADS for two years on Monday. However, he steps into the National Media Center for such briefings.

Being the I&B Minister makes him the point person to ensure fake news regarding COVID-19 is curbed for which a small team working from him liaisons with the ministry and keeps him informed. Fake news from passing on old fire as a result of candle burning at the call of PM Modi this Sunday to attaching communal undertones to the Tablighi Jamaat controversy in Delhi”s Nizamuddin, Javadekar has to ensure they are curbed and do it from his home.

For most of his ministerial works, Javadekar prefers to call up and talk with his Secretaries and Joint Secretaries than going into a video conference.

The Maharashtra leader” work doesn”t end there. He also is being given party assignments that can be done from home in the last three weeks. For instance, every BJP member needs to encourage 40 others to donate to PM-CARES. Ministers too are expected to do that.

At a time when 133 crore Indian are locked inside, the one ministry apart from health that becomes extremely vital is that of food and public distribution. Paswan also heads the consumer affairs ministry and has to ensure essential food items like rice, wheat, pulses are available aplenty and reaches each Indian, not hoarders.

Paswan has not been entirely functioning through home. He has been visiting his ministry regularly, and attending GoMs. Sources say, one of the reasons for the minister to increasingly step out, even for a short while, off late is because PMO is believed to have directed that quality of video transmission with PM Narendra Modi cannot be compromised. In other words, Skype or Zoom are not options. Hence ministers are increasingly visiting their ministries for better video conference facilities.

READ ALSO:  US warns of potential cyberattacks from Iran amid tensions

While home, Paswan prefers to coordinate with his ministry officials and other related office bearers like that of NAFED through phone.

He also has curtailed the number of staff that generally move with him like shadows.

With 70 per cent of its rural households still dependent primarily on agriculture for their livelihood and about 83.3 crore people living in rural areas, Tomar”s role as Agriculture Minister becomes extremely crucial when the farmers are confined in their homes while their harvest is left unattended in fields.

What makes Tomar”s job tougher is it is the beginning of the Rabi harvest season. There have also been spells of unseasonal rains destroying a certain part of the wheat, mustard and chana crops.

Tomar has been one of the very few ministers who have been relatively regular in going to his ministry even in this time of total shutdown. Tomar was there in his ministry on Monday, and Tuesday too. Sources say, he has another meeting through a video conference with different states planned for Wednesday, which will go live from his ministry.

However, he has ensured the staff present at his ministry during the shutdown remains minimum. He is also the Rural Development and Panchayat Raj Minister – ministries that affect millions. Tomar prefers to be in touch with his officials through text services and sometimes calls as well. His day ends at 1 a.m. on an average everyday, said a source.

It is not just the urban salaried class or the corporate honchos who wake up, eat breakfast and start working from their home, switching on their laptop webcams – Narendra Modi”s cabinet is pretty much doing the same.

Shah revisits strategy to wipe out Maoists from their jungle redoubts

Centre, State unanimous on offensive against Maoists in Chhattisgarh

Assam will be made free from illegal immigrants: Shah

At current pace, all eligible Indians to get jabs in over 3 yrs

Oscar nominations out, ‘The White Tiger’ in race for Adapted Screenplay