Scindia in BJP: Now Shivraj and Maharaj are together, says Chouhan 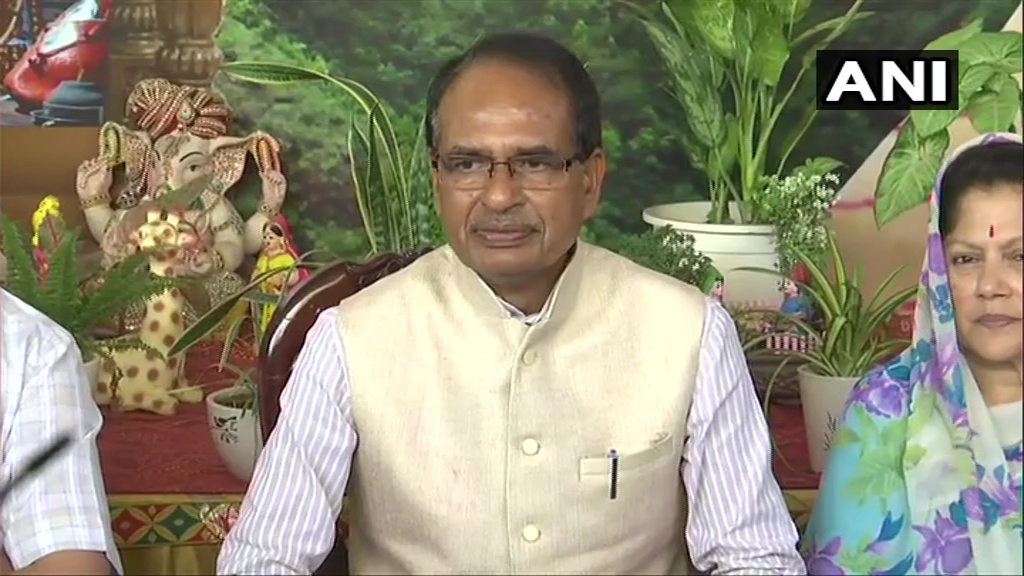 Bhopal, Mar 11 (PTI) Welcoming Jyotiraditya Scindia into the BJP, senior party leader Shivraj Singh Chouhan on Wednesday said he was the most popular Congress politician in Madhya Pradesh, which led the saffron outfit to coin a tagline targeting the erstwhile Gwalior royal in the 2018 state polls.

In the run-up to the November 2018 assembly elections, the BJP had centred its campaign around a slogan, Maaf karo Maharaj hamara neta toh Shivraj (Sorry Maharaj, our leader is Shivraj)” to take on the Congress.

Chouhan was then the BJP chief minister and was seeking a fourth term in office.

Scindia (49), a member of the royal family that once ruled Gwalior, is popularly known as Maharaj among his supporters.

Asked how he will feel now to work with Scindia whom the BJP targeted during the assembly polls campaign, Chouhan said, If anyone was popular among Congress leaders, it was Maharaj, so we used ”Maaf karo Maharaj” slogan. Now Shivraj and Maharaj are together in the BJP.”

Chouhan, the BJPs national vice-president, was talking to reporters here after Scindia joined the saffron outfit in the presence of its president J P Nadda in Delhi.

The former chief minister defended Scindia”s decision to leave the Congress, a party with which he was associated for nearly two decades.

“The disgruntlement of Maharaj (Scindia) with the Congress is justified,” the BJP leader said.

“This is a joyous day for the BJP and me personally. Today, I remember (his grandmother) Rajmata (Vijaya Raje) Scindia. Jyotiraditya Scindia has become a member of the BJP family.

“The entire (Scindia) family is with BJP. They have a tradition where politics is a medium to serve people,” Chouhan said.

How Kamal Nath was outwitted and Scindia lured to BJP fold

Jyotiraditya Scindia, who is in the eye of a storm after he resigned from the Congress along with 22 MLAs, had scripted a good show in the Gwalior-Chambal area, the pocket borough of the Scindia family, in the last assembly elections.

A good showing in the Gwalior-Chambal area also meant that the BJP fared poorly in the area. Sources say it is since then that BJP leader and Union Home Minister Amit Shah has been eyeing Scindia and was in fact instrumental in inflicting a crushing defeat on Scindia by a rookie from Guna constituency in the last general election.

A senior Congress leader told IANS that Amit Shah was keen to pitch Bollywood actor Kangana Ranaut from Guna to defeat Scindia but Ranaut pulled back at the last minute. Later Shah put K.P. Yadav, a one time Scindia loyalist, against him who inflicted a humiliating defeat on Scindia in the 2019 elections from Guna, by a margin of over one lakh votes.

Just six months back, former MP chief minister Shivraj Singh Chouhan and Narendra Singh Tomar had told Amit Shah that Scindia is feeling suffocated in the Congress due to Kamal Nath and Digvijaya Singh who according to Scindia are bent upon finishing his political career. Shah then asked Chouhan and Tomar to send feelers to Scindia.

The matter came to a boiling point when Scindia was denied the first Rajya Sabha seat from Madhya Pradesh and the BJP sensed the opportunity to strike while the iron was hot.

As per the sequence of events, Shivraj Singh Chouhan first met Scindia and gave him assurances that his self respect and interests will be protected. Shivraj also had Scindia talk to Amit Shah during that very meeting. Shah also assured Scindia of protecting his interests and told him to start speaking to MLAs loyal to him.

Amit Shah then entrusted ‘Operation Scindia’ to Vinay Sahasrabuddhe, Shivraj Singh Chouhan, Narendra Tomar and Dharmendra Pradhan. Hailing from the same region, Tomar’s politics has been anti-Scindia for long but Shah stressed upon the bigger picture of ‘capturing Madhya Pradesh’.

All the four trusted Shah lieutenants kept meeting Scindia from time to time. For the last one week, Chouhan has been camping in Delhi and instead of staying at MP Bhawan, he put up at Haryana Bhawan to dodge the media. Scindia and Chouhan kept meeting at different locations in Delhi and Gurugram to keep it a top secret.

Their first strike took place in Gurugram a few days ago where MLAs close to Scindia were put up there. But the Congress foiled the bid as it got wind of the rebellion in the nick of time with Digvijaya Singh.

However, this foiled bid could not delay for more than a week the political drama that unfolded on Tuesday when Scindia along with Amit Shah met Prime Minister Narendra Modi and minutes later announced his decision and sent his loyal MLAs to Bengaluru after giving them assurances that they will be ‘rewarded’ for breaking away from the Congress.

Our economic package not different from other countries: FM

Covid cases to surge from migrant influx, but we are ready: Harsh Vardhan

New Delhi, May 25 (IANS) The Union Ministry for Health and Family Welfare has come up with guidelines for international arrivals into India through...
Read more
National News

New Delhi, May 25 (IANS) A survey by the Confederation of Indian Industry (CII) has shown that around 71 per cent people in the...
Read more
Business News

New Delhi, May 25 (IANS) India''s retail trade lost business of around Rs 9 lakh crore during the past 60 days of the nationwide...
Read more

Bhopal, March 16 (IANS) The Madhya Pradesh Assembly was on Monday adjourned till March 26, the polling day for Rajya Sabha, over the Coronavirus...
Read more

Covid cases to surge from migrant influx, but we are ready:...